Getting Started: 5 Tips on Writing Your First New Play

Have a story to tell? Well, let’s get started.


We all have stories to tell. Some of them compelling and exciting. Some of them are about the dry toast I had for breakfast this morning. Either way, it’s in our human nature to tell stories and what better way than on stage! At Native Voices we produce and develop new plays, some from seasoned playwrights, but many from new writers who just have something to say. We want to see new voices from Native Americans reach a wide number of audiences, and the way to do that is to have people like you write!
riting your first play may seem like a daunting task, and I’m not gonna lie. It is. It is a lot of hard work, but it will pay off tremendously in the end. There’s no other feeling like hearing actors reading your lines for the first time. But if you find yourself sitting in front of your computer staring at a blank Word document or keep thinking “I’ll just start writing after this episode of The Sing-Off, and do the dishes, and close my eyes for just a little…” don’t worry. First step in a long journey is always the toughest, right? Here are a few tips to help you get over that hump.

1) Read and Watch a lot of plays.
Reading other plays helps give you an idea of how a play is structured, stories are formed, characters interact, and dialogue works. Think of it as a very entertaining textbook. Watching plays helps you understand what happens when words are performed as well as become aware of things like lighting, sound, and stage cues. Check out old classics and new ones as well to get an understanding of the gamut of theatre out there. Go to big shows in 1,000 seat theatres and small ones where there's only ten seats in the house. Seeing what's out there helps generate ideas in your head.

Most stories come from the writer's life experiences. Your entire play might be about a particular incident, or one of your characters might be based on your neighbor, or you simply want to use a funny line that your co-worker said. For practice, try thinking about an incident in your life and turning it into a scene that might be in a play. Where were you? That’s the setting. You are the main character, now what was the first thing said in the incident? When taking from your life experiences, remember to give yourself the creative license to fictionalize some portions. Take Joy Harjo’s (Mvskoke) Wings of Night Sky, Wings of Morning Light, produced by Native Voices in 2009, for example. This play was a deeply personal one-woman show where she weaved in reflections on her life stories with music and singing. You can do the same by keeping a notebook or recorder handy at all times (or try this). You never know what play-worthy encounters you’ll have that you will want to record.
mosangels.ning.com
3) Write the bad version first.
Many writers hit a wall while writing trying to write the perfect first draft. Alas, there is no such thing as a perfect first draft. Don't be afraid to just start writing anything and everything, and it doesn't even have to be in a play format. Don't get stuck on small details or particulars; the important thing is to get words down on paper (or the keyboard). Try one of these prompts to get you going. Native Voices works with plays for a long while, from first draft to production. We had worked with Carolyn Dunn’s (Muskogee Creek, Cherokee) hit play The Frybread Queenfrom 2007 to 2011, working through draft after draft and this is the case for most plays in theatre. It takes a while to get things just right, so don’t put so much pressure on yourself in the beginning.

4) Let your characters speak to you.
Try starting with the characters themselves. Who are they? What 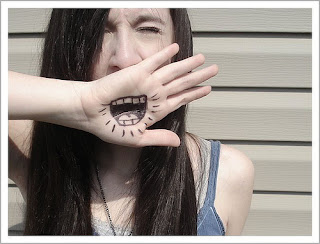 is their personality? What does he/she eat for breakfast? Where are they from? Do they have pets? Try to get down as many details as possible – a mini biography of sorts. All of these details shouldn’t be in the play, but are there to help you figure out how these characters will speak and react in the world you've put them in. Only then will they come to life and start speaking to you, rather than you struggling to find the words. This will also help you keep your characters on track in obtaining their goals throughout the play.

Healthygirl.org
5) Be Unique.
There are a lot of resources out there and experts that will tell you how to write a play. While it's important to do research to learn the basics, remember that you are writing a play because you have a story to tell, and we want to hear that story because you are unique. Don't try to just do what's been done but rather put your own spin on an old concept. Shakespeare’s Romeo and Juliet has been told throughout the centuries in many different forms, but only playwright James Lujan (Taos Pueblo) was able to retell it in a way that had never been done before in Native Voices’ 2005 production of Kino and Teresa. In their most basic forms, everything has been done before. How can you make it different? Plays are all about conveying a specific voice. What’s yours? How can you tell your story your way? 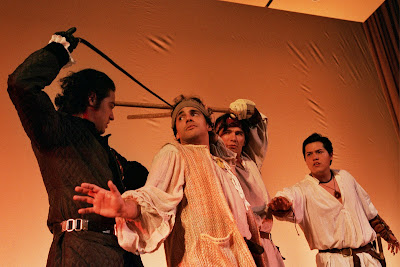 Native Voices 2005 production of Kino and Teresa
But don’t take my word for it! Here are some great sites and blogs about playwriting and writing in general to help you get started! Happy penning!
Script Frenzy (Update - Closed 2012)
Working Title
Adam Szymkowicz
The Subversive Copyeditor
John August

Got your own tips? Share them with us in the comments section!